Is the Great Resignation Permanent? 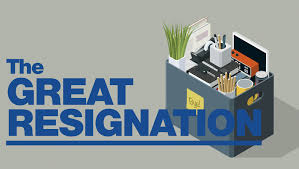 Gaining traction since April of 2021, the Great Resignation has created a labor shortage for many industries that are now struggling to fill open positions. While some speculations early on suggested that workers would return in droves before the holidays, time is beginning to tell a different story. A poll conducted by the US Chamber of Commerce showed a surprising 65% of unemployed Americans don't expect to return to the workforce before 2022 with a third of them expecting their return to happen after April of 2022.

The Outlook on the Great Resignation

There is a growing portion of those who have quit who state they'll simply never return to the workforce and have instead opted for early retirement or self-employment. Previously employed individuals who still plan on finding new work are coming to the negotiation table with new demands. Increased pay is at the forefront of everyone's minds but they're also wanting more extensive benefits, workplace safety procedures and employee appreciation.

Demands such as these are especially important for those looking to work in the hospitality or service industries. The pandemic has given families a chance to evaluate what's important to them and low-paying jobs that don't invest in their employees aren't making the list. Younger generations are also cutting costs as much as they can in order to gain financial freedom and take full advantage of the long life ahead of them.

Work-life balance is the focus for those who have quit in 2021 and if the job market can't strike the right balance, workers won't be returning anytime soon. Such a mass wave of employees quitting is a huge red flag to employers telling them that they can do better. The Great Resignation also isn't the result of job hopping as workers in the 60s and 70s quit more often compared to the last two decades. The 1980's saw the beginning of Americans sticking with their jobs out of a lack of support even if they didn't like their work.

What This Means for the Future of Businesses

Workers are requiring livable wages and a healthier work-life balance out of their employer knowing that there are dozens of other positions available. Being able to walk into a store and get an interview on the spot means it's up to companies to create value for new hires. Otherwise they'll face unfilled positions for months on end which creates a chain reaction of lost productivity and revenue.

Owners that pay sustainable wages and care for their employees haven't felt the impact of the Great Resignation nearly as much and this is good news. Smaller communities such as our own will increase in numbers and begin to thrive as families leave the dense city for a more suburban lifestyle. The groups migrating out of the city are also looking to start their own small business or chase more creative dreams that bring unique value to places that normally would have to travel into the city for it.

The key takeaway from what we've seen of the Great Resignation is that Americans are putting more value into their time, opting to spend it with loved ones and exploring their interests. Workplace culture will need to transition in order to keep up and see a return of employees come 2022.